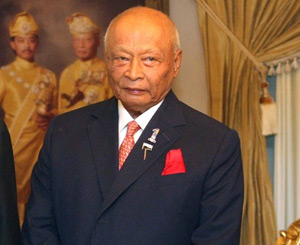 A student of the Malay College Kuala Kangsar, he received diplomas in public administration from Worcester College, Oxford and Exeter University. He succeeded his father as sultan in 1974.

His election as Yang di-Pertuan Agong in 1979 was marked with controversy as he was said to be at odds with the incoming prime minister Dr. Mahathir Mohamad. However, the rumours proved to be untrue and he proved to be a keen admirer of the prime minister.

A controversial, headstrong personality, he has often forced his chief ministers to resign over minor differences.

His favourite hobby was playing football, golf, polo, and equestrian.

His official and royal consort, Tengku Ampuan Afzan binti Tengku Panglima Perang Muhammad, a member of the Terengganu royal family, served as his Raja Permaisuri Agong but died of cancer on her return to Pahang on 29 June 1988. Sultan Ahmad Shah's junior wife Kalsom binti Abdullah (nee Anita), was designated as the Sultanah of Pahang in 1991.